What if books could slip under covers and swap stories?
This book report matches a pair of unknown titles,
-- strangers to each other, until introduced here: 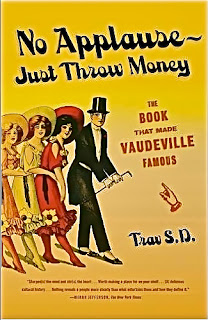 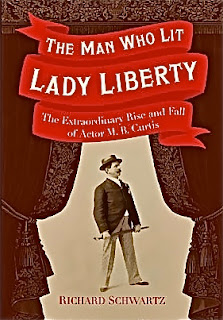 “The Man Who Lit Lady Liberty:
The Extraordinary Rise and Fall of Actor M.B. Curtis”
by Richard Schwartz (2017) Heyday Books


Readers of this blog may take 30% off their order of
The Man Who Lit Lady Liberty.
Simply enter code JJ1MW when you check out
from www.heydaybooks.com

Direct Link:
https://heydaybooks.com/book/the-man-who-lit-lady-liberty/
this code only works on Lady Liberty;
there is no expiration date or maximum number of copies.

"I'd rather have a bottle in front of me, than a frontal lobotomy!"
-- old radio Spoonerism joke, anon.

History can be most unkind to anyone born ahead of one’s time – especially someone from the Nineteenth Century who may have suffered from what my friend Marin County comedian Mike Duvall liked to call a “chronological order disorder”. That strange affliction includes associated maladies known as “Nervous Fever” and “Nervous Prostration”.

The latter term needs no introduction as it flat-out defines its ownself. The more scientific sounding “Nervous Fever” is defined in Webster’s 1913 Dictionary as: “a low form of fever characterized by great disturbance of the nervous system, as evinced by delirium, or stupor, disorderly sensibility, etc.”

Nineteenth Century medicine needed “hangover” terms like these to cope with the “disorderly stupor” of alcohol abuse among bourgeoning populations of immigrants adapting to strange American cities and customs at a time of Industrial Revolution, but long before Prohibition, Alcoholics Anonymous or electric lights.

“Liquor had always been an integral feature of theatergoing, from the wine cult of Dionysus straight on through. Bibulousness began to reach new highs (or lows), however, when advances in distillation made cheap whiskey widely available after the 1820s … In its rough-and-tumble heyday the Bowery was something like Times Square, Coney Island, Ripley’s Believe-It-Or-Not Odditoriums and Atlantic City all rolled into one, full of bars, gambling halls, whorehouses, dime museums, and plain old theaters.”
– author/playwright Travis Stewart, aka Trav S.D.

Suffering from serious chronological disorder is the historic memory of an “almost totally forgotten” actor and showman M. B. Curtis who aspired to his strange career during a time of great flux in theater history. In 1873, the year Curtis made his breakout appearance in “The Boy Detective” at Chicago’s Woods Theatre, the City of London began to require “Certificates of Suitability” for minimum legal, sanitation and safety standards in British theaters. Two decades later, by 1893, Oscar Wilde had become the darling of West End stages while Curtis’ career as a public person essentially ended abruptly that same year when the actor went on trial for murder.

In late Nineteenth Century America, the life of any touring actor was a treadmill of hardscrabble travel, fleabag flophouses, unpaid IOUs and low-class disrespect. During this transitional period of theater history, candlelit stages had been abandoned but the limelight and gaslight that replaced the candles still rendered most theaters uncomfortable fire traps – particularly for large “crowded houses” cooking in their own body heat. The legal concept of “shouting FIRE in a crowded theater” is based on this sobering fact of theater life – long before electricity or heating-ventilating-air-conditioning systems.

“The latter half of the Nineteenth Century was a time of great change for the American theater. It was a time of tremendous growth in population ... especially in cities on the East Coast. Americans had more leisure time and better standards of living, and they looked to the theater to provide entertainment ... The expanding transportation system in the United States allowed actors ... to tour the country, bringing professional theater to many towns and cities that had never before experienced it. As the population of the country grew rapidly, the number of theaters in large and mid-size cities grew as well. From the 1850s until the turn of the century, thousands of new theaters were built.”
– University of Washington Libraries – Digital Collections

Onto this chaotic scene burst M.B. Curtis, a trouper whose main claim to fame was becoming the first Jewish immigrant to perform as Hebrew. At the time, most immigrants performing in variety theaters were Irish, as had been the case since George Washington’s time.

Perhaps if M.B. Curtis had been born two decades later, he could have assimilated theatrical innovations that would have sustained his reputation, if not his sober disposition. But Curtis was born too early for any suitable acting career in bawdy vaudeville houses, comfortable “legitimate theaters” or motion picture studios. The actor died in 1920 – when movies were young and vaudeville was in its heyday. But by then, he was a broken, “fevered” man whose story had been lost in buried news clippings and mounds of missing memorabilia.

Theater history ignored the incredible biography of M.B. Curtis until Berkeley author/historian/builder Richard Schwartz unearthed the tragedy during two decades of meticulous research for his well-paced Heyday Book, “The Man Who Lit Lady Liberty”. Schwartz is known for his archeologically nuanced books focused on the many eccentricities of Berkeley, but clearly this oddball East Bay character needed his own volume. 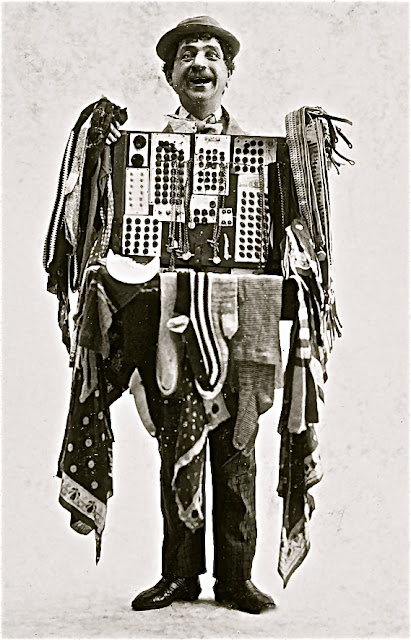 Maurice Bertrand Curtis as
“The Drummer” Sam’l of Posen

Curtis stood out among actors as an incredible mimic who “could be his own circus,” according to Schwartz. “He could imitate animals as well as human beings.” The young thespian came to San Francisco from Chicago in the mid 1870s as a supporting dramatic player in a time of widespread economic depression. While theater workers suffered from lack of work, Curtis became notorious as an actor/manager running his own successful traveling stage company with his costar wife Marie who toured with him. And his notoriety grew, not necessarily for his exploits on stage as much as off. This includes ambitious Berkeley real estate investments – including the ill-fated Peralta Park Hotel – which never had a chance to live up to promise.

Two years before London and New York stages were experimenting with the first electrical theater lighting systems, Curtis settled into his signature character – Sam’l of Posen – who was always “drumming” up business as a traveling salesman. Another two decades would pass before most theaters had switched from gas to electric lights. But by then, Curtis’ stage career took a turn toward the “cliffs” from which he’d hang long after his sudden bout of Nervous Fever in the fateful early hours of September 11, 1891.

Curtis was performing at least two decades before vaudeville’s systematic scheduling and routing of acts on “The Circuit”. Schwartz points out “Sam’l of Posen” was eventually whittled from a four-act melodrama into an unsuccessful vaudeville sketch, but Curtis really never had full advantage and experience of transcontinental management which drove and sustained vaudeville at the turn of the Twentieth Century.

One is left to wonder if Curtis viewed vaudeville as a big belittling of his dramatic talents. He would have gone from manager/star of his own touring show into just another cog in constant shifting gears of back-to-back variety acts playing from dawn to dusk. Curtis would have fallen from “legit” star to variety bit player. And that must have taken a heavy toll on the actor’s own impression of himself in a dressing room mirror.

To further obscure his acting legacy, Curtis only appeared in one motion picture and that was not preserved on film, except for three frames which Schwartz offers in this elegantly illustrated biography. Indeed, the book is most compelling when it casts its spotlight on strange details of Curtis’ eventual acquittal of murder charges brought after the drunken shooting of SFPD Officer Alexander Grant in front of a police station on Folsom Street on that September morning of 1891. In a time of jury-tampering and witness-shopping, the actor suffered through three very public mistrials of the matter, and lost his real estate investments all after that one bout of Nervous Delirium.

M.B. Curtis’ life was so complex, there’s no space in this book report to delve into the story behind Schwartz’ provocative title – a primary indicator of the actor’s widespread fame in one century but total lack of it in the next. However, reading “The Man Who Lit Lady Liberty” is certainly its own reward and Richard Schwartz deserves every accolade he receives for recalling history’s attention to this incredible Nineteenth Century trouper and local misfit.

Who Put the Devil in Vaudeville?

Our small town found itself on the vaudeville circuit in the 1920s. Conveniently for all the acts who tromped through town, the main vaudeville house was located four blocks from the train station with a hotel midway between them on the same street. The theater is now a public defenders office, the rail station abandoned and the hotel destroyed by fire. People in our town today watch “vaudeville” offerings 24/7 on laptops and smartphones attuned to video “variety acts” continuously running back-to-back on social media. In that regard, vaudeville is not “dead”.

Not far from our town-- beyond Berkeley – is San Francisco’s Orpheum Theater which opened in 1887 and became, according to playwright/author Travis Stewart “the birthplace of a vast vaudeville circuit that would dominate the entire country west of Chicago.” Stewart likewise believes vaudeville is not “dead”.

Stewart (aka “Trav S.D.”) leaves no stone unturned to prove that point in “No Applause – Just Throw Money”, as he sifts the sands of variety theater from the Greeks to the present. When he’s not working on plays, Stewart covers culture, arts, politics and theater for The Village Voice, New York Sun, Time Out and Reason. That perspective allows him a unique vantage point and his vaudeville book stands alone as a thoroughly informed study of American theater history – not just variety theater. It’s difficult to find one reference book offering such a detailed breakdown of theater forms.

But Stewart’s book takes care to point out vaudeville itself was less about its smorgasbord of offerings as it was about management and movement of these various acts around the continent. Long-distance telephone and railroad lines had enabled actors (and animals) to efficiently travel from town to town on a variety circuit that could not have existed otherwise. No internet business models existed then. Indeed, the only “audience” anyone knew then was a “live audience”.

Or perhaps, a hung jury?

While Travis Stewart makes no mention of M.B. Curtis, Richard Schwartz likewise does not refer to the vaudeville book. But both titles read together provide an deep and intensive background in Nineteenth Century theater history which would be impossible to gather otherwise.

“The Man Who Lit Lady Liberty”

Jamie Jobb
A curious fellow who sometimes appears on stage, Jamie Jobb is an obscure Martinez California based writer, home-movie maker and visual storyteller who makes moving pictures with and without cameras. Jobb has worked as a reporter and photojournalist in Florida and Colorado. In California, he contributed to a wide variety of educational publications and multi-media projects. Jobb’s widely unread books have been published by Little Brown, William Morrow and Scribners/Sierra Club. Jobb has performed before sparse audiences as Henri Freud on line and live on the Marsh Studio and Mainstage in San Francisco. An independent videographer, aka Traveling Light Studio, he also works with community theater groups for live and screened productions in the San Francisco Bay Area. Occasionally Jobb writes for the stage. Other books by Jamie Jobb: The Complete Book of Community Gardening My Garden Companion The Night Sky Book Jobb’s videos may be found on YouTube: https://www.youtube.com/jamiejobb and The Internet Archive: https://archive.org/details/@jamie_jobb